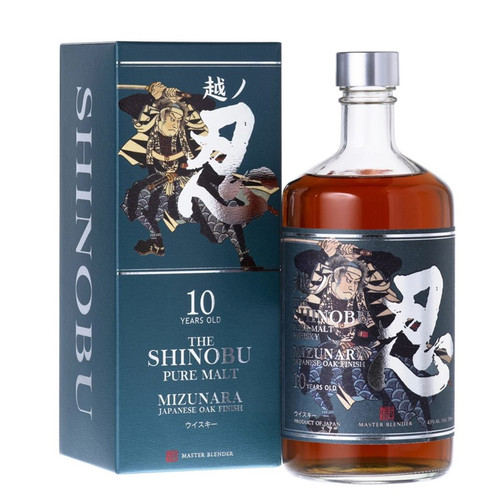 As with much of what passes for Japanese whisky, the spirit for this one was not produced in Japan, it was however matured there for at least some of its life. This "pure malt", a term no longer allowed in Scotland, means it is a blend of different single malts, or a Blended Malt. The sourced whiskies, almost certainly Scottish, where matured in ex-Bourbon and ex-Sherry before marrying and gfinishing in Mizunara, Japanese Oak. 43%.

Nose: rich and fruity with loads of caramel and soft toasted oak; a touch maritime with a hint of salted caramel; juicy malt, bright orange, Demerara sugars and a hint of plum wine.

Comment: I am more impressed by this than I thought I would be; the Mizunara wood finish has added a very rich and spicy element to the whisky; the producer has taken foreign malts, and given them a distinct Japanese character.

Shinobu Distillery was granted a license to produce whisky in 2018 in the seaside region of Niigata on Japan's west coast. The founder of the distillery, Mr. Usami Ken, founded a craft beer brewery called Niigata Beer 20 years ago in the same town. Mr. Usami was the first brewer to apply secondary bottle fermentation and aging in Niigata Beer. He also dreams of creating a local whisky distillery that will be able to showcases the quality of local pure water. While his own spirit is maturing, Mr. Usami is blending and bottling imported whiskies which he produces without chill-filtration or added colour.