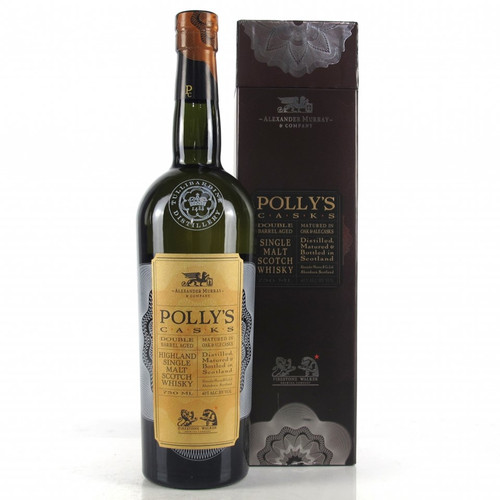 Alexander Murray & Co. Pollys Casks Single Malt Scotch is a non-vintage, no age-statement Tullibardine. This was matured in a combination of oak and ale casks and bottled Alexander Murray & Co for the Firestone Walker Brewing Company in California, USA.

The release is called Polly's Casks.

Being a prolific independent bottler, Alexander Murray & Co. certainly has an advantage when it comes to creativity due to having multitudes of spirit expressions at their disposal. And so unbridled creativity gives rise to unique and innovative expressions such as their Polly Cask range which blends the rich flavors of single malt Scotch with the distinctive flavors of fine craft beer.

Each batch of Alexander Murray & Co. Pollys Casks Single Malt Scotch Whisky begins with 60 barrels of single malt Scotch sourced from the Tullibardine distillery in the Scottish highlands. Originally matured in ex-bourbon oak barrels, the whisky is sent to the Firestone Walker Brewing Co. in California where they are finished in casks used to age Firestone’s Proprietor’s Vintage beers. After a year, the whisky is finally tapped, brought to proof, and then bottled, creating a one-of-a-kind Scotch whisky expression that brings together two of the world’s most iconic drinks.

Each sip begins with a light nose bursting with honey-like sweetness, fresh grass, and fruits, paving the way for a sweet and youthful palate of grapefruit zest, dried stone fruits, baking chocolate, wheat grass, vanilla, licorice, Himalayan salt crystals, faint hint of hops with a touch of earthiness, all tied together by a medium-length finish of overripe citrus, smoke, butterscotch, cocoa, and a fading hoppy bitterness.

Fruity and complex, the Alexander Murray & Co. Pollys Casks Single Malt Scotch Whisky is the perfect whisky to break the monotony of your daily dram. So get yourself a bottle today and indulge in the innovative and intriguing flavors of this fine cask-finished Scotch expression.