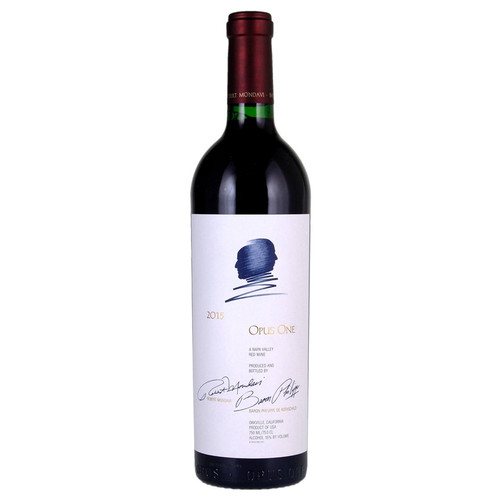 98James Suckling
Purity and brilliance on the nose with so much currant and flower character. Roses, currant bush and fresh leaves, too. Brightness is the word that comes to mind.

97+The Wine Advocate
...wonderfully spicy notes of cinnamon stick, cloves and fenugreek with a core of cherry preserves, redcurrant jelly, blackberry pie and warm plums plus hints of camphor, lavender and cigar box.

96+Vinous / IWC
Dark, sumptuous and voluptuous in the glass, with no hard edges, the 2015 captures all the essence of the vintage while retaining a good bit of aromatic freshness.

17.5Jancis Robinson
...the nose, as well as transmitting freshness, is appetising and cedar. This is a fresh, direct wine that developed some spiciness in the glass.

Opus One
This justly famous winery represents one of the most celebrated international winemaking ventures in modern history. Founded in 1979, Opus One was a joint venture between Robert Mondavi and Baron Philippe de Rothschild of Chateau Mouton Rothschild. The Pauillac/Napa Valley enterprise was a long-time dream of both winemaking families and from Opus One’s first vintage in 1979 it was clear that the idea was to make a wine with character that represented the best of both Bordeaux and Napa Valley. Even the label represents a meeting of the two legendary families, since the label shows a stylized profile of both Robert Mondavi and Baron Philippe de Rothschild. Opus One has earned high praise over the years and is considered one of Napa Valley’s signature wines. The winery owns vineyards in Oakville and grows Cabernet Franc, Cabernet Sauvignon, Malbec, Merlot, Petit Verdot, Sauvignon Blanc and Semillon. About 30,000 cases are produced annually. In 2005 Constellation Brands purchased the Robert Mondavi Corp. and assumed 50% of the ownership of Opus One. The other half is still owned by Baron Philippe de Rothschild, S.A.