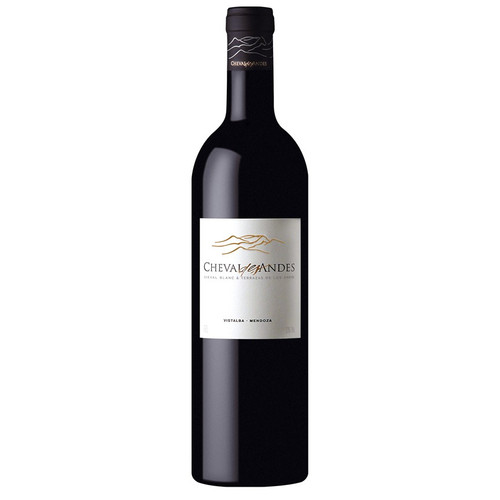 Cheval des Andes was founded in 1999 and is a joint winemaking venture between Terrazas de los Andes, a subsidiary of Moët Hennessy in Argentina, and Cheval Blanc the renowned Saint-Emilion 1er Grand Cru Classé.

Cheval des Andes is situated in the Las Compuertas district in the Cordilleras, or foothills, of the the Andes. Las Compuertas itself is located in the the renowned Lujan de Cuyo department of Mendoza. The 50 hectare vineyard has an excellent terroir with superb soil and climatic conditions for growing red wine grapes. The proximity to the mouth of the Mendoza river means it relatively good and the vineyards are irrigated by pure water rich in minerals running off the Andes. The soil is sandy-loam / stone with good drainage which encourages deep root growth. The Malbec vines, some of them 80 years old, have never been grafted.

There are five different grape varieties grown at Cheval des Andes: Malbec, Cabernet Sauvignon, Merlot, Cabernet Franc and Petit Verdot. The different grape varieties are harvested by hand and undergo careful bunch and berry selection at the winery. The wines made from each variety are aged for 18 months in French oak barrels (30% new, 70% second fill) and the final blend is predominantly Malbec and Cabernet Sauvignon with some, all or none of Merlot, Cabernet Franc and Petit Verdot. Finally the wine is final blend is assembled and then allowed to marry and mature for another 6 months in French oak barrels. In 2013 the wine making team introduced 400 and 500 litres French oak barrels in order to preserve more of the fruit’s crispness, so there was a slight style change from this vintage. The wine is bottled and aged for at least 18 months in bottle prior to release. This Argentinian / French enterprise has resulted in one of the most prestigious Argentinian wines defined but freshness and purity. The assemblage is carried out under the watchful supervision of Pierre Lurton, President of Cheval des Andes & Château Cheval Blanc along with Technical Director Pierre-Olivier Clouet and Technical Manager and winemaker Lorenzo Pasquini. A Grand Cru of the Andes!

B Side Cabernet Sauvignon 750mL