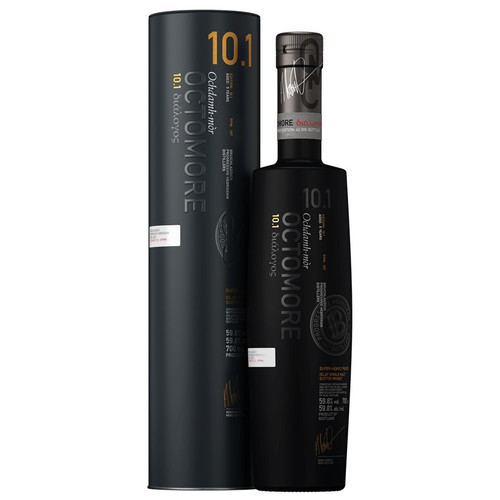 Distilled from Scottish barley in 2013, Octomore 10.1 is the benchmark of the 10s series. Deliberately stripped back to an ex- American oak maturation, aged just 5 years old, the .1 edition exposes the structure and presence of the Octomore spirit. Combining smoke with a modest maturation, this 10.1 first and foremost demonstrates the true potential of a considered, patient distillation.

The Octomore single malts have defied received wisdom since they first distilled in 2002. Adopted by the quietly confident, Octomore has gathered a dedicated following over the years.

Now reaching its 10th series, the new iterations explore a different realm of ‘softer smoke’. We ask you to dismiss the numbers, and forget everything you think you know. Experience the liquid for yourselves. An openness for the unexpected is encouraged in its creation, so too in your reception.

Forget about whisky. Forget about the Octomore you thought you knew. This series will destabilise even the most devout aficionado. Complex, layered, and endlessly alluring… with instinct over obsession.

CHARACTER – Lithe, supple, powerfully confident and a dram more than the sum of its parts. Slow trickle distillation is the hallmark of this muscular, oily spirit.