Spirits of the Apocalypse The Walking Dead Bourbon 750mL 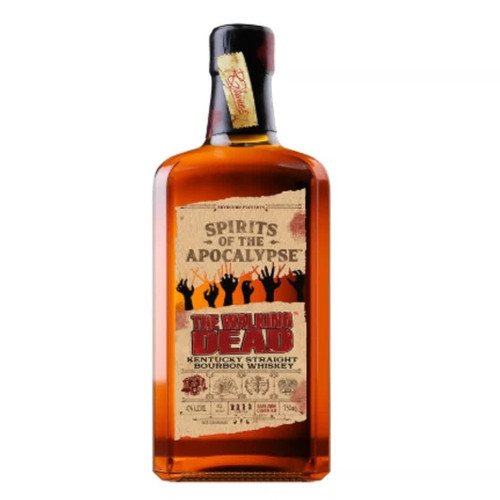 Spirits of the Apocalypse The Walking Dead Bourbon 750mL

Spirits of the Apocalypse The Walking Dead Bourbon is a serious Bourbon bottled in fun from Diageo.

Producer Diageo is one of the largest Spirits producers in the world. Headquartered in London, their annual sales top UK £12 billion — that’s US $15 billion. If you drink adult beverages just about anywhere in the world, you’ve had their products which span nearly every style, and geography.

Diageo has had several successful releases co-branded with big television events. Most recently they had two releases of Johnnie Walker Scotch based on HBO’s Game of Thrones series. At this year’s big ComicCon event in San Diego, Diageo announced the coming of a new brand — Spirits of the Apocalypse — in conjunction with Skybound Entertainment. Several fun-fueled products are planned, but the first is The Walking Dead Straight Kentucky Bourbon. The distillery is not mentioned, but Diageo owns Bulleit Bourbon, so that’s our bet. But this… ahem, zombie Spirit shuffles in at a higher proof of 47% ABV. And it is, indeed, a real deal Straight Bourbon worth a dram that won’t leave you dead on your feet.

Flavor / Taste / Palate
The palate is smooth and a bit spicy with notes of warm oak, maple, toffee, and mulling spices.

Finish
The finish is medium to long and lightly dry.

Sweetheart Of The Rodeo Bourbon 750mL