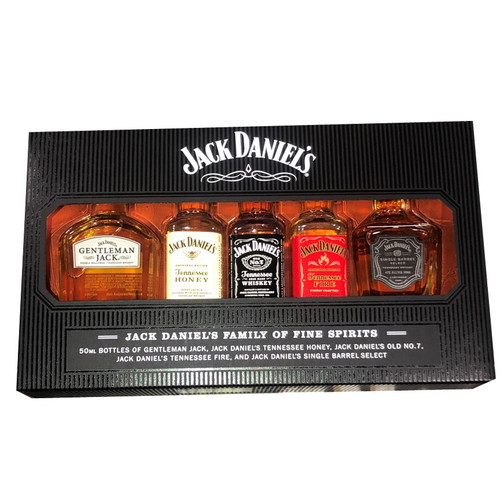 Jack Daniel's Tennessee Whiskey Gift Pack - 5pk / 50mL Bottles is the perfect gift for that Jack lover! Every drop of Jack Daniel's Tennessee Whiskey savored in more than 170 countries around the world is crafted in one place - a little town called Lynchburg, Tennessee. They let their whiskey slowly drip through 10 ft of hard sugar maple charcoal so it comes out with its distinctive smoothness. It's a costly, time consuming process and if it sounds extravagant, well, it is. They are the only major distillery in the United States to craft their own barrels. A barrel is more than a container for whiskey. It's an ingredient. That's why Jack Daniel's always insisted on making their own. They don't know a whole lot about Mr. Jack Daniel's life. He never thought to record it. However,they do know how he made his whiskey and the one guiding principle he left them to follow in the making of it: "Every day we make it, we'll make it the best we can."