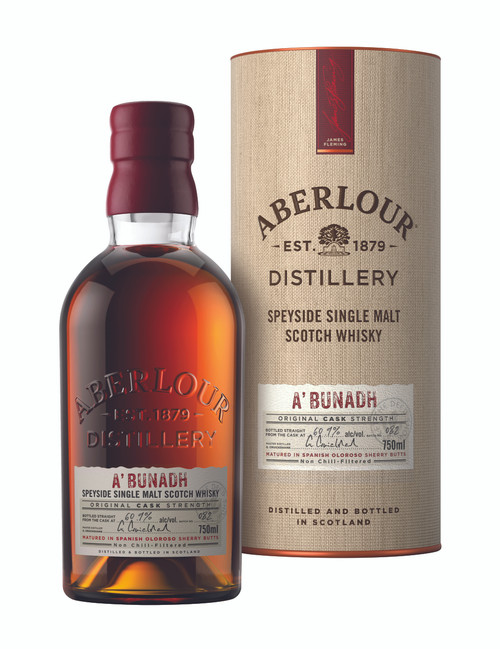 Made in tribute to an 1898 bottle of Scotch, this whisky earned the highest recommendation from Wine Enthusiast.

Founded in 1879 by James Fleming, a son of a local tenant farmer, Aberlour Distillery is situated at the confluence of the Lour and Spey rivers in Strathspey, Scotland. In 1898, just three years after Fleming passed away, a fire consumed several of the distillery's buildings and most of its inventory of whisky. Under the supervision of Charles Doig, however (one of Scotland's foremost designers of whisky distilleries at the time), Aberlour Distillery was rebuilt.

In 1975, legend has it that workers were installing a second pair of stills at Aberlour Distillery. During the installation process, the workers discovered a time capsule buried beneath a nameplate they were forced to remove. The time capsule contained an 1898 newspaper article about the distillery fire, which was wrapped around an 1898 bottle of Aberlour Scotch Whisky. Although the workmen drank nearly the entire bottle during their lunch break, a small portion of the whisky from the bottle was preserved and sent to a laboratory in Keith, Scotland for analysis. Aberlour A'bunadh Single Malt Scotch Whisky is a tribute to that 1898 bottle of Scotch.

Released in limited-run batches, the whisky is matured in Spanish oak casks previously used to age Oloroso sherry, a dark and nutty type of fortified wine. The Oloroso sherry casks, which are some of the rarest and most precious casks used for maturation, impart subtle yet sweet notes of dried fruits and caramel to the whisky, and add an incredible layer of complexity.

After maturation, the non-chill filtered whisky is bottled at cask strength (it is never diluted with water) in bottles reminiscent of old apothecary bottles used by 19th century villagers to collect Scotch directly from barrels.

Aberlour A'bunadh (which is Scottish Gaelic for "origin") has a slightly smoky aroma with hints of red apples and caramel. It has a rich mouthfeel, and a buttery, creamy palate. The initial flavors of chocolate, cherries and dried fruits blend with hints of honey and spice and lead to a lingering finish that is robust and intense. A'bunadh earned the highest recommendation from Wine Enthusiast and the title "Best in Class"at the Speyside Whisky Festival Awards in 2011.

Pick up a bottle today!