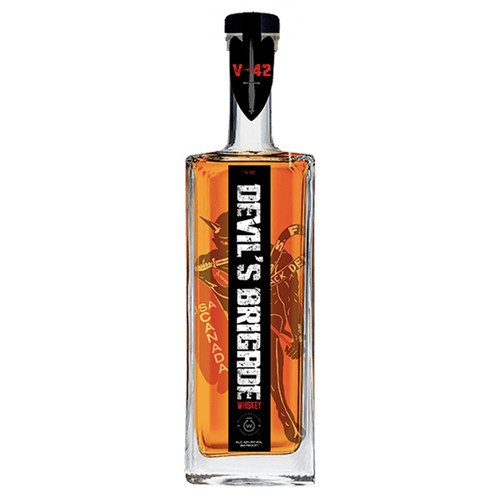 “THE WORST IS YET TO COME” was written on the death cards placed upon dead Nazis by the Devil’s Brigade. Officially known as the First Special Service Force, the Devil’s Brigade trained at Fort Harrison near Helena, Montana, and was comprised of Back-Country Rangers, Soldiers, Lumberjacks, Northwoodsmen, Hunters, Prospectors, Explorers, Game Wardens, and Mountain Men who volunteered to join the secretive unit in 1942 during WWII. This joint American-Canadian commando unit was known for their stealth and skill with the V-42 dagger and had quickly gained the nickname “Black Devils” and a reputation for their fierce style of fighting at night in blackened faces.

Made of 60% American Bourbon and 40% Canadian Whisky just like the percentage of men assigned to the Unit, this blend of whiskies is our way of honoring the bravery and valor of these men who fought in World War II with distinction. The legacy continues with current American and Canadian Special Operations Forces who trace their lineage and heritage to the “Forcemen.”

A portion of the proceeds is donated to the Special Forces Association Chapter XXVIII “Devil’s Brigade Chapter,” which is a non-profit veterans service organization based in Montana.