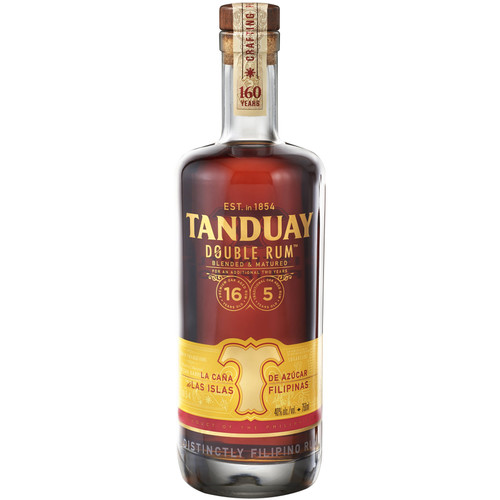 Tanduay Double Rum is a blend of rums that are aged between 5 and 16 years. After their initial period of aging, they are blended together and left to marry for an additional 2 years in ex-bourbon barrels, which gives the different juices time for the aromas and flavors to come together. This deluxe offering from Tanduay is bottled at 80 proof and has an exquisite balance of dried tropical fruits, nutty overtones, as well as vanilla and oak notes.

The dark amber rum has dried tropical fruit on the nose with a prominent pineapple note and a pleasant nuttiness. The palate has more of those tropical fruit notes, along with some brown sugar, cherry, and vanilla. Finishes with lingering oak, raisins, and zesty overtones.

Tanduay has been crafting Asian rum since 1854, bringing a mysterious Eastern twist to the spirit. Headquartered in the Philippines, its origins go back to a distillery from Hagonoy, Bulacan, that was bought in 1856 by Ynchausti y Compañia, a multi-national company that was owned by the Ynchausti family, the seal of which still decorates their bottles today.

By the 1900s the production had moved to the Manila distillery, and the brand Tanduay Rhum was formed, named after the area in which the distillery was located. The rum was produced in the significantly upgraded distillery in Manila until 2013, when it was decommissioned and the production moved to a much larger facility in the Philippines, capable of producing 100,000 cases each day.

Since 1999 Tanduay Distillers, Inc. is owned by LT Group, Inc. In 2011, Tanduay was the 7th largest spirits brand in the world. Today their operation spans 4 plants that take care of aging, compounding, and bottling. At the heart of their lineup is an award-winning 5-year-old rum that matures in charred oak barrels. The brand has received over a hundred various awards over the years and sells over 20 million cases each year, making it one of the best-selling rum brands in the world