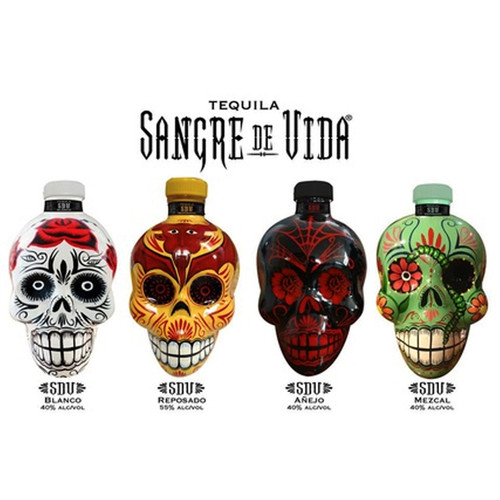 Sangre de Vida Tequila Blanco – A fresh but somewhat flabby blanco, with a curious but appealing nose of fresh cream, milk chocolate, and restrained sweet agave. The palate showcases all of the above, in even heavier concentrations, with an almost milky body that layers in hints of almonds and cinnamon. There’s plenty to like here, but it doesn’t drink particularly like a blanco — and the finish is on the thin side.

Sangre de Vida Tequila Reposado – Overproof reposado, aged at least three months. A vastly different experience than the blanco, the SdV reposado is racy on the nose, punctuated with black and cayenne pepper, dense herbs, and overtones of ripe citrus. That sweetness that prevails so clearly on the blanco is also present here, though it becomes clearer after time in glass lets some of the alcohol vapors to resolve. The finish is spicy and warming, heavy on vanilla and banana notes over a relatively long fade-out.

Sangre de Vida Tequila Anejo – Aged at least 12 months. Supple caramel and coconut aromas hit the nose, with herbal agave just a gentle hint. On the palate the tequila is quite sweet, with notes of toasted marshmallow, caramel, and butterscotch. Vanilla endures well into the finish, which only nods gently at pepper and earthy agave notes.

Sangre de Vida Mezcal – 100% espadin agave from Oaxaca, aged 60 days in oak. Warmly smoky, with winey and fruity notes on the nose.It starts off as rather plain for a mezcal, offering a garden-variety winey character, barbecue smoke, and notes of honey and fruit preserves. The finish is epic and not entirely in a good way, its cloying sweetness lingering for days, leaving the palate significantly out of balance and with any real sense of agave.

Each bottle is 50mL