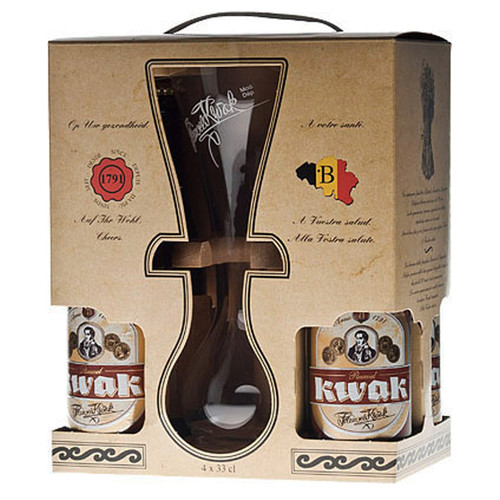 This gift set of Pauwel Kwak beer includes 4 330mL cans of beer as well as a corporate glass of characteristic shape, with the lower spherical part on a wooden stand.

"Pauwel Kwak" - an excellent Belgian strong ale that is produced Bosteels Brewery since 1980, to restore the ancient recipe once very popular in Flanders beer. There is a legend that the beer is named after the brewer Pauvela Kwak, who at the beginning of the XIX century was the owner of the restaurant "De Hoorn" and brewed dark beer. In his restaurant often stopped the driver, which in those days were not allowed to leave the wagon. Therefore Kwak came up to them glasses with unusual shapes that can be placed in special wooden holders located beside the driver on the cart. So, the driver could drink beer without leaving his seat and even on the road. Another cause of the name "Kwak" is considered to be a characteristic sound like a rapidly spoken word "quack", which appears as soon as the air in the glass with beer reaches the bottom of the spherical glass.

Brewery Bosteels, located in the Belgian city Boggenhaut, was founded in 1791 and all these years belongs to the family Bosteels. Today, the brewery run by representatives of the seventh generation of the family. The brewery produces three beers: "Tripel Karmeliet", "Deus" and "Pauwel Kwak", each of which has won a number of awards at specialized contests.

Color - Beer rich amber color.
Taste - In the saturated fatty taste of beer and malt tones prevail bread, there are fruity notes, but not so abundant as in flavor. The finish is dry, moderate carbonation.
Aroma - Fruity aroma of beer with hints of peach, pear, banana and apple notes supplemented malt, spices, nougat and caramel.
Gastronomy - Beer well as an aperitif or digestif, goes well with game and salmon, can be used with desserts.
×