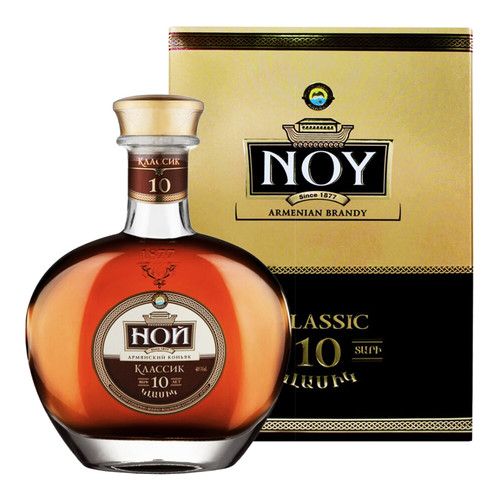 Collection Cognac "Noah" by the Yerevan Brandy-Wine-Vodka Factory "Ararat" is named after the biblical Noah, who landed after the flood, according to legend, in the valley of Mount Ararat, the first vines, becoming the "progenitor" of viticulture and winemaking in Armenia.

Cognac "Noi Classic" 10-year-old - one of the best in its category. It is named in honor of the classical architecture of Erivan Fortress of the XVI century, which was restored by the architect Rafael Israelian. Cognac is made from regional grape varieties - Voskehat, Mskhali, Garandmak grown in the Ararat valley. Used in the manufacture of brandy double of Charentais distillation, then the drink is aged at least 10 years in oak barrels. A blend of cognac contains a high percentage of old cognacs, so it has more flavor than other cognacs this category. "Noy Classic" is bottled in "crystal clear" original bottle Helios, which perfectly underlines the quality of this exquisite cognac.

Brandy production in Armenia began in 1887, when Nerses Tairyan, which is the first guild merchant, built a wine-distillery, which first began to produce Armenian brandy. It was then born of innovation and technology is still the hallmark of Armenian brandy production. Later, the company acquired the owner of the famous partnership in Russia "NL Shustov and Sons. " Ararat brandy become so popular that after some time the company became the official supplier of the Imperial Household, and in 1902 cognac factory won the Grand Prix in Paris, which was proof of the highest quality beverage, and the French allowed him to wear the proud title of "Brandy" instead of "Brandy".

Taste: Strong, rich, deep, fruity brandy has a velvety texture and refined astringency and dryness in the finish.

Gastronomy: Cognac is recommended to serve as an aperitif and digestif.