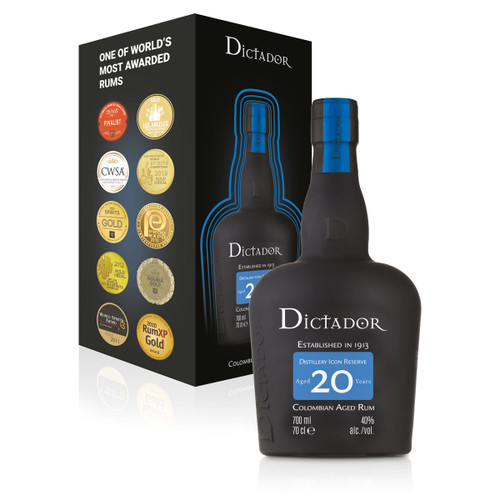 Distilled from light molasses, Dictador 20 Year Old Columbian Rum has been matured for twenty years in the solera system, resulting in a complex, full-flavored and well-integrated spirit. The nose opens with sweet aromas of caramel, butterscotch and honey, balanced by undertones of tobacco and oak. The round, mellow palate displays distinctive notes of vanilla, toffee, dark chocolate, caramel and roasted coffee, accented by a lingering touch of smoke on the finish.

In 1751 Severo Arango y Ferro arrived in Cartagena de Indias to oversee commerce between the American Spanish colonies and Spain. His strength and power earned him the nickname "Dictador" and under his leadership, the city became the most important port for the Spanish Armada. Dictador was partial to the wide variety of Caribbean rums which were traded through the port and over time became a noted trader and producer of exotic, high quality rums. In 1913, almost one hundred eighty years after Dictador arrived in Cartagena de Indias, one of his descendents established Destileria Colombiana. Today, the distillery honors their legacy with their line of Dictador Rum - a combination of high quality aged rum, innovative European design, and state of the art Japanese bottles.