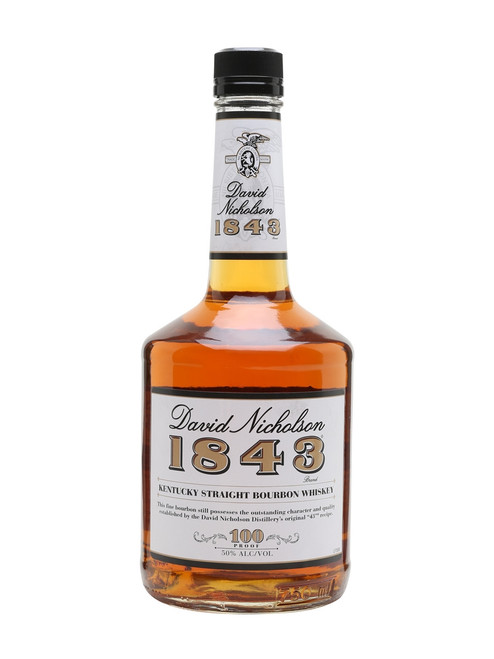 David Nicholson 1843 Bourbon Whiskey is one of the most sought-after bourbon's out there! This bourbon is amazingly smooth, and is the winner of the Double Gold at San Francisco World Spirits competition. 1843's award-winning taste is appreciated from coast to coast.

The story goes that David Nicholson was a grocer out of St. Louis who started selling his own bourbon in 1843. The spirit was popular and eventually the name was sold to Julian Van Winkle. In 2000, the brand was bought by Luxco who has been producing the bourbon ever since. In the private back room of a grocery store on North 6th Street in St. Louis, Missouri, unbeknownst to its forefather, a legacy was born. The store's owner, David Nicholson, created the famed ‘43’ bourbon recipe. Little did he know that his recipe would be passed on and passed down, remaining unaltered for almost two centuries. Still possessing the outstanding character for which it earned its original popularity in 1843, the David Nicholson legacy lives on unchanged, unfettered, and unmatched.

David Nicholson 1843 was always a regional product and after Prohibition it was made by Stitzel-Weller for the Peter Hauptmann Company, or so said the label. Hauptmann was primarily known as a seller of tobacco products and he died in 1904. There is evidence that the company was in business until at least 1921, but nothing post-Prohibition. It is possible "Peter Hauptmann Co, St. Louis, MO" was just a Stitzel Weller DBA, validated as a 'real' address via a P.O. box.

In modern times, the David Nicholson 1843 brand was notorious within the small circle of hard-core bourbon enthusiasts for showing its distillery as DSP-16 (i.e., Stitzel-Weller) long after the supply of Stitzel-Weller whiskey was effectively exhausted. Luxco claims the error was a simple oversight, they just kept re-printing the label as it was. This is plausible since only bottled-in-bond (BIB) products must show the producing distillery on their label, and BIBs are a very small segment of the market. Likewise, David Nicholson 1843 has always been a very small brand, even for Luxco.

As a Stitzel-Weller product, David Nicholson 1843 was a wheated bourbon, the same basic liquid as Old Fitzgerald, W. L. Weller, Cabin Still and the rest of the line, including Rebel Yell which Luxco also now owns. It continued as a wheater even after the source of the whiskey changed.

Nose
Rich scents of honey and butter are followed by subtle hints of vanilla and oak.

Palate
Exceptionally smooth to start, followed by woody, smoky overtones, with a long, warm finish with a touch of spice.