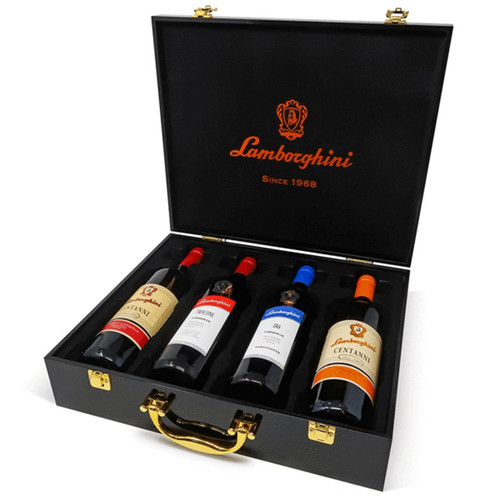 Lamborghini's unmistakeable style and quality offers the ultimate wine that ignites a breathtaking experience that will last forever. A wine that stands out for its ability to cater to the individual's taste, expectations, and desires.

Lamborghini Trescone: This red IGT Umbria was named for a traditional dance performed during the harvest. It is our youthful wine and is produced in Umbria, in the Trasimeno lake area, from Sangiovese, Merlot and Cabernet Sauvignon grapes.

Lamborghini Era: a Sangiovese IGT from Umbria, represents our interpretation of the most popular vine of the Trasimeno area and has been produced in 2007 for the first time. Its name has been inspired by mountain Era, which overlooks the vineyards and the estate.

Lamborghini Red: A vibrant, intense interpretation of the Umbria region, this red combines mouth-pleasing floral notes with flavours of stone fruits and a pleasing minerality.

Lamborghini White:  It was created to celebrate the centenary of the birth of Ferruccio Lamborghini, the founder of the Estate. Bright pale yellow, the nose is elegant and rich with notes of flowers. The palate is full, pleasant and persistent.

Ferruccio Lamborghini was an Italian industrialist. In 1963, he created Automobili Lamborghini, a maker of high-end sports cars in Sant'Agata Bolognese. He went to build the very first super car in the world.

Born to grape farmers in Renazzo, from the comune of Cento in the Emilia-Romagna region, his mechanical know-how led him to enter the business of tractor manufacturing in 1948, when he founded Lamborghini Trattori, which quickly became an important manufacturer of agricultural equipment in the midst of Italy's post-WWII economic boom. In 1959, he opened an oil heater factory, Lamborghini Bruciatori, which later entered the business of producing air conditioning equipment.

Lamborghini founded a fourth company, Lamborghini Oleodinamica in 1969 after creating Automobili Lamborghini in 1963. Lamborghini sold off many of his interests by the late 1970s and retired to an estate in Umbria, where he pursued winemaking.