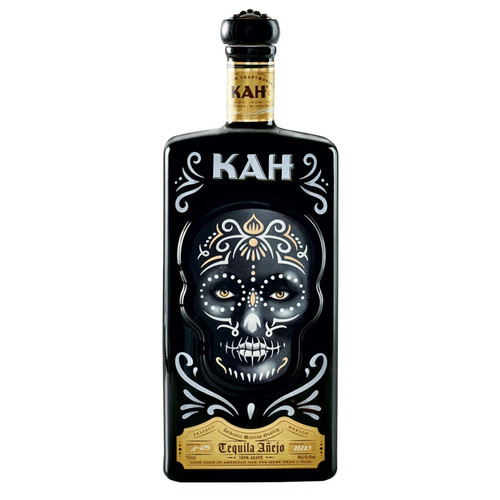 KAH Tequila is produced by Fabrica de Tequilas Finos located in the town of Tequila in Jalisco, Mexico. Most of the people working at Finos have worked there since its establishment in 2000, and that includes KAH Tequila Master Distiller Arturo Fuentes who has been dedicated to the production of alcoholic beverages for forty-five years. More than a decade ago he was part of the team that created KAH – outstanding 100% Blue Agave Tequila inspired by Day of the Dead celebrations.

The official rules dictate that a Tequila must be aged for a minimum of one year to be called "Añejo." KAH Tequila Añejo is 100% pure Weber Blue Agave aged in American white oak casks for eighteen months — 50% longer than required. The agave is precisely roasted in a high-pressure autoclave, double-distilled, and bottled at 40% ABV. Black bottle design is inspired by the Nicaraguan tradition of Día de los Muertos. Families build a shrine and exchange gifts. Many stay behind to sleep in the graveyard. They believe that this act re-enforces the emotional connection between them and their ancestors.

Nose / Aroma / Smell - On the nose you’ll find a lot of barrel influence with notes of caramel and vanilla laying over toasted agave and cilantro.

Flavor / Taste / Palate - The palate opens up with rich notes of English toffee, pipe tobacco, plantains, and a dash of pepper with a creamy texture.

Finish - The finish is medium length with a lingering warm spice.