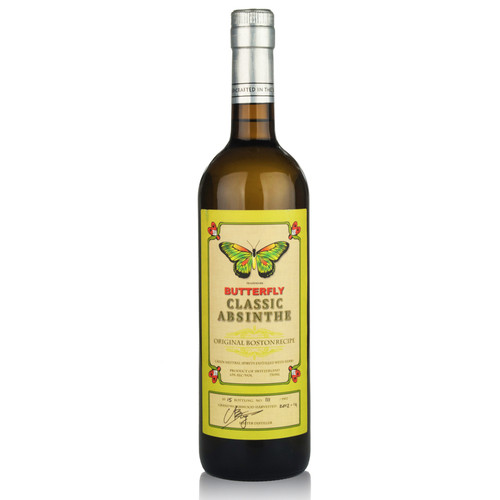 Butterfly absinthe is a modern rendition of a classic pre-prohibition absinthe produced in Boston in the early 1900s. America was ripe with domestically produced absinthe prior to prohibition. The absinthe Americans created was unique in style and different from what was imported from Europe. Pre-Prohibition American absinthe made liberal use of the herbs growing in the Midwest and New England. Fields of wormwood were scattered across the country and yielded so much of the famed herb that it was exported to Europe. The style stands out from other classic absinthes by its use of mint, citrus zest and other herbs creating a complex but refreshing flavor profile.

Claude-Alain Bugnon, of La Clandestine fame, was approached to see if he was interested in the project. Claude-Alain was intrigued by the idea of Butterfly and agreed to create a distillers proof from Dempsey’s recipe. From there, Butterfly went into commercial production with a release date in the summer of 2010.